With workforces scattered, communication within a business has never been so important. Best Employers share the secrets of effective engagement.

One of the unintended consequences of the lockdown and the move to remote working has been that a great many companies have changed the way they communicate with their employees – usually for the better. Whether it’s weekly bulletins or daily updates, emails or video conferences, staff have never heard so much from the organisations that employ them. But does quantity of communication necessarily equal quality?

“The companies communicating well are being transparent,” says Lynn Walters of recruitment specialists Pure. "They update the staff on a regular basis and highlight the positives, but are honest about the challenges. They’re realistic about the situation but they communicate hope about what can be done.”

As one of the biggest employers in the region, with more than 4,000 staff, it was imperative that Anglian Water managed its communications around coronavirus efficiently. “Our approach was a standard incident-management response,” explains Victoria Sloan, internal communications business partner at Anglian Water. “In the early stages, our communications were very much reactive, keeping people up to date with the changing situation. Now we’re transitioning into a more supportive stage.”

The scale of Anglian Water’s internal communication is similar to many businesses’ external communications – and there are great similarities between the utility giant’s internal and external comms. “Our employees are normally our customers as well,” Victoria points out. “So we’re have to be consistent and we’re repeating a lot of the same messaging: we explain the changes in the way we have to work and remind people to follow the guidelines on social distancing. External messaging uses a lot more social media.”

For internal communications, managers receive briefing packs and there’s a weekly news stream for all employees, plus additional weekly Covid updates. Each of the company’s four business area reinforces these with messages adapted for what works best for its people.

With such a large, diverse workforce it’s essential to use a range of channels. Anglian Water set up a dedicated intranet page with Covid-19 information and advice, it has so far sent more than 49,500 text messages and more than 40 email updates. “It’s important to use a consistent title for the emails,” Victoria explains. “Then if people want to go back to one later, they can easily find it by searching the inbox.

“Text messages really work to reach the whole workforce,” she adds, "And we’ve found that videos are very well received. We’ve put out eight so far, but we’re aware that the size of video files can put extra pressure on the digital network so we don’t overdo them.”

There is one area where internal communications differ from external comms. “There is a huge focus on employee wellbeing,” Victoria says. “We have to send out timely, clear communications that show empathy for what our people are experiencing. It’s important to build the confidence of employees that we’re responding to the crisis in the most appropriate way."

As an essential utility, Anglian Water hasn’t put a single member of staff on furlough – quite the opposite of brewing and hospitality giant Adnams, which employs more than 500 staff and has furloughed over 90pc of them. While many businesses aren’t communicating with staff on furlough, as a Best Employer Adnams is working hard to look after them.

“As we prepared to furlough people it was important not to have some kind of sweeping statement about the state of the company,” says Sadie Lofthouse, director of culture and performance at Adnams. “If you tried to communicate this kind of thing with some generic message it would just go horribly wrong. When it was still possible, we had lots of meetings – some with groups, lots of face-to-face meetings.

“Since people have been furloughed, we’ve been over-communicating. In the past there was sometimes a frustration that you’d send a message out and people wouldn’t read it or listen to it. Now there’s a real appetite for information.” Adnams uses everything from “old-fashioned” letters to email and, especially, social media to keep every furloughed employee feeling connected to the business.

As a smaller company with 44 employees – with less than a third on furlough – marketing agency StrategiQ has moved away from email for its internal communications. “The trouble with emails is that it’s so easy for them to be misconstrued – especially when emotions are running high,” says MD Andy Smith. “I didn’t want to risk how people might react to a clumsily worded email.”

Instead, the video conference has become the mainstay of internal communication at StrategiQ - not only within teams but also bringing together everyone in the company. “With important messages, you can’t see how people react to an email. We wanted to create an environment where it’s possible to talk,” explains Andy. “It’s not as good as being in the same room as someone, as you don’t necessarily get to see the body language, but you hear things better and pick up on the tone so things aren’t taken the wrong way.”

By now, most people are comfortable with their preferred video-calling system – whether it’s Teams, Zoom, Google Hangouts, Skype or something else. It’s brought about a shift not only in working practice but also in working culture. “The dress code has changed,” observes Lynn Walters of Pure. “There’s a shift to a much more relaxed style of dress.  What we once thought of as work-appropriate is changing as people work from home. Whether that stays or whether it changes again remains to be seen as we come out of lockdown."

This change – and, especially, letting colleagues into our homes – is a positive thing for managers, she says. “It's enabling people to share more of themselves,” Lynn says. “This is something we stress is really important in the work we do with leaders. It makes them more approachable, building trust and engagement."

The consensus seems to be that video conferences can produce more-focused, successful meetings – when they’re well-managed. “It is surprising how bad some people are on video calls, even just knowing how to use the software,” says Andy Smith of StrategiQ, diplomatically naming no names. “The etiquette of the video call is important – and we think we’ve got it down to a tee..."

“Everyone is silent when they join a meeting. There’s an intro from the meeting host and people put their hands up before speaking, with the host calling them to speak rather than having people talk over each other.

“It’s still important to understand how to hold a good meeting,” he concludes. “To be clear on your agenda and what you have to get out of it.”

Video conferences aren’t just for task-related meetings, though. They can also be vital for promoting the links within a team, reinforcing the social nature of work and helping with staff wellbeing. Many firms are using the software to bring people together for virtual coffee breaks or lunches, so people can blow off steam or talk about non-work topics – as they would around the water-cooler in the office.

“One company we work with hit a milestone they hadn’t expected to reach whilst under lockdown," says Lynn. "All the members of the team were sent a box of goodies that they opened together on their Friday afternoon video conference.  This enabled them to celebrate together even though they were apart.”

“It’s really important for managers to check in regularly with their people,” says Lynn. “Communication needs to be timely and it needs to be personal so people feel valued. It’s difficult to do that with big calls, where there are lots of people on a team, so it’s important to follow up.”

This means the one-to-one calls can be the most important ones. Many businesses do them towards the end of the day, to allow a catch-up on the day’s progress. However, those calls shouldn’t be entirely task-focused. It’s important that they’re video rather than voice calls, to reinforce the sense of human connection and help stave off any sense of isolation in remote-working staff.

“People like to talk about themselves. Being given that opportunity makes them feel valued,” says Lynn. “It’s easy to think short-term about getting the current tasks done, but it’s more important to think long-term and look after the people to make sure it’s sustainable.”

For large-scale communications, check that you’re using enough – and appropriate – channels to reach the audience. The bigger the audience, the less likely it is that one method of communication will reach every person. Consider posting videos for key communications and using text messaging to get a large up-take. Use social media, if appropriate, to reinforce messaging.

Make sure you’re using consistent headings – whether that’s “Coronavirus”, “Furlough” or simply “Update” - as this makes it easy for staff not only to quickly understand what a message is about but also to search for and find messages if they want to go back to them.

Try to minimise the number of emails – they can be impersonal and too easily misconstrued. Video conferencing is more human and less likely to be misinterpreted. Large meetings should be followed up by smaller ones; then smaller ones followed up by one-to-one calls to make everyone feel connected, valued and empowered.

Make video meetings more effective by ensuring everyone within a team knows how they should work. Whoever is running the meeting needs to make sure everyone is heard, that the agenda is followed and that an outcome is reached.

Find opportunities for teams to socialise virtually and don’t limit one-to-one calls to work. Don’t be afraid to make sure people are taking time to exercise and look after themselves. 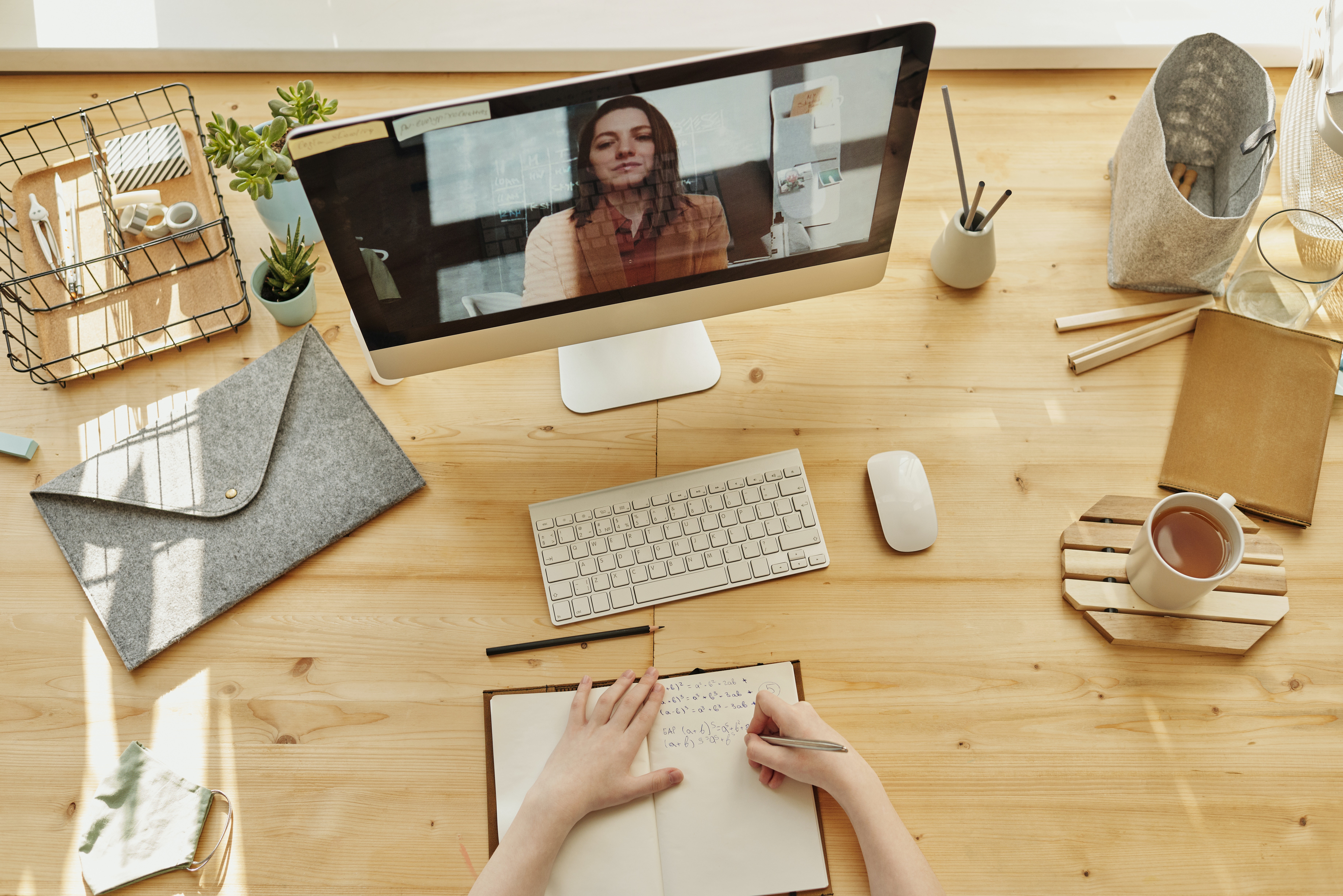 Lynn is a founding Director of Pure and leads Pure Executive with over 25 years recruiting for Executive appointments. Lynn supports East of England-based businesses with senior management and Board level recruitment. Lynn leads the Best Employer Eastern Region Initiative and the Women In Leadership Programme both of which are aimed at helping companies and people to develop.

How to stop office burnout in its tracks

How to recruit the right people

Working with a recruitment consultancy